(This is from an email briefing to international climate colleagues)

We take heart that in Australia we have changed the government. Citizen concern with lack of action on climate change was a large part of this as surveys and polls showed. Many of us have been working hard in the background for weeks and months with community campaigning, holding forums, letterboxing, and some joining candidate campaigns to bring about this result.

We still don't know if it will be a Labor minority or small majority government as preferences are counted in several close electorate contests. The major conservative Party - the Liberal Party -  suffered a 20 odd seat defeat. But Labor only picked up some of these seats. A loose alliance of Community Independents - the Teal Independents - picked up at least 6 seats from the Liberal Party in their heartland electorates. The Greens also increased their numbers from 1 MP to 3 MPs, and possibly a couple more.
Nationally, all major parties suffered swings against them and with increased support for Independents and the Greens.
The Teal Independents picked up normally conservative electorates in Sydney, Melbourne and Perth. These independents stood on a triple agenda of greater climate action (60% emissions reduction by 2030 target), increased integrity in Federal politics, addressing gender equality. The Teal Independents elected come from the centre of politics, and once may have been at home in a more moderate Liberal Party, but have become increasingly alienated as the Liberal Party has moved further to the right in Australian politics and used climate change as a wedge issue over the last 10 years. The Liberal Party failure to move to more female representation and gender issues about working in Federal Parliament, also fed into alienation on gender equality. No coincidence that all the new TEAL independent MPs are professional women.
The Greens wins are based in Brisbane with grassroots face to face door knocking and campaigning contributing to their success. The Greens have science based targets of 74% emissions reduction by 2030 and 100% by 2035, phase out of thermal coal export by 2030. Recent major flood events in Brisbane, south east Queensland and Northern New South Wales only further emphasised the poor climate mitigation and adaptation policies of the Morrison Government. The opening of a second runway in mid 2020 for Brisbane airport also resulted in thousands of noise complaints and a campaign to address airport flight path noise issues which moved citizens away from supporting major parties and to support the Greens.
Labor climate policy a real improvement but still less than needed
Labor was trying to be a small target in this election, one of the reasons they have been slightly less ambitious than in previous elections. Their central climate policy on Powering Australia sets a framework for renewable energy rollout. But like the Paris Agreement it remains silent on fossil fuels and phase out of coal and gas, particularly for the export market.
Labor's climate policy of 82% renewables and increased climate targets of 43% emissions reduction by 2030 are an important framework, but not nearly enough and if all countries did the same would result in a 2C world. See the Climate Analytics assessment of major parties and Teal Independents climate policy with consistency with the Paris Agreement 1.5C target.
No restriction on fossil fuel export: There is no Labor policy to phase out the mining of coal or gas for export at the moment. In fact Labor Policy supports new coal or gas extraction if it meets environmental assessments and is assessed as economic. Labor proposes letting market conditions determine the fate of the export fossil fuels industry.
Fossil Fuel Political Donations: The Liberal, National and Labor Parties all accept substantial political donations from the fossil fuel industry.

Fossil Fuel Subsidies: There is also no commitment to phase out fossil fuel subsidies presently running at about $11 billion per year.
Global Methane Pledge: The Morrison government refused to sign the global methane pledge at COP26 to reduce methane 30% by 2030, and Labor's Anthony Albanese also refused to give a commitment as opposition leader. There is inaccurate measurement of methane emissions (See ACCR recent report on Glencore's methane problem), with the IEA estimating Australia is under reporting methane emissions by half.
Hold a UNFCCC conference: Labor has committed to asking to organise the United Nations climate conference in 2024, COP29, in partnership with a Pacific nation. The Australia Institute has assessed that the “bid for the 2024 COP in partnership with the Pacific could shift Australia’s reputation from climate laggard to regional leader. This shift should be accompanied by substantive changes to Australia’s climate policy, including on Australia’s climate aid and re-joining the UN Green Climate Fund. Hosting a COP would also have a number of economic, diplomatic and security co-benefits.”
I have written on Labor's climate policy here, or read the Climate Council assessment of Labor Climate Policies.
Senate Balance of Power:
The Greens are very likely to pick up 3 new Senators in the upper house, bringing their number to 12 and possibly holding the balance of power.
Having more Greens MPs and community Independent MPs will add pressure on Labor to increase climate ambition past its 43% emissions reduction target by 2030. If not in this 3 year election cycle, then perhaps in the next cycle. As energy transition ramps up, including in renewable hydrogen generation and use,  structural transformations will provide greater alternative to workers in coal mining, which might allow Labor to perhaps improve their policies on coal and gas phaseout.
Environmental regulation much outdated:
The Environment Protection Biodiversity and Conservation Act (1999) which offers regulation of mining approvals is badly in need of updating. The Morrison Government has been sitting on the Samuels Review of this legislation and its recommendations since October 2020. See Key messages. Labor needs to address this review and substantially improve this legislation to improve approvals of new mines on environment and climate grounds.
The outgoing conservative Federal Environment Minister has also delayed release of The State of the Environment Report prepared by scientists to forestall release of public details of the decline in ecosystems and species before the election.
In the final days of the campaign Labor promised to set up an independent environmental protection agency with regulatory powers. Time will tell how much bite this body will have.
So is the change of government important?
Yes. It's vital. It provides a framework of action here in Australia, to build upon, to rejoin ambition on a global level and no longer be a drag on negotiations at the international level and in the UNFCCC process.
But there is so much more to do on a Federal level, to push the Labor ministers on more ambition, and in State Government and local government. We must  avoid any complacency that this change in government is enough. It is a much needed step in the right direction.
Update: How Climate concerned citizens voted
The Climate Council put out an analysis on Monday morning: Climate Election 2022: Unpacking how climate concerned citizens voted.
Key findings were:
The report noted especially the climate impact on regional electorates and the swing away from National and Liberal Party MPs.
Using ABC Votecompass data, the Climate Council noted:

In almost 90% of electorates (132 out of 151) climate change was rated as the most important issue by more than one in five people. In the seats where there was a teal independent candidate concern was even higher. With 42% of people rating it as the most important issue in Wentworth, 40% in Kooyong and 39% in North Sydney. Climate concern was also very high in seats where there have been recent climate change-driven extreme weather events like Richmond (34%), Macquarie (30%), Gilmore (30%) and Eden Monaro (31%). In fact, climate concern was very high across the board including in communities within traditional “coal seats” like Newcastle (33%) and the Hunter (23%). Polling run throughout the election campaign also consistently found that climate change was a top voter issue. 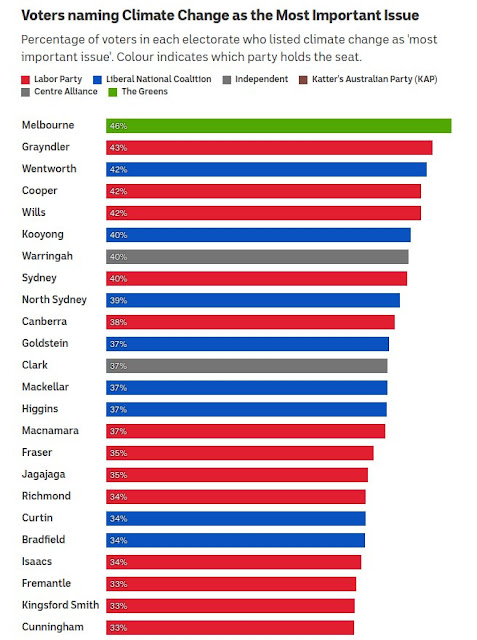 The Climate Council report particularly noted the voter swing changes in regional electorates;
› Cowper (Nationals) in north-eastern NSW which was affected by terrible flooding and fires in recent years. The community swung away from the sitting National MP by 6% and a climate independent running for the first time gained more than 25% of the primary vote, and is likely to run second.
› Nicholls (Nationals) in northern Victoria saw a 25% swing towards an independent with strong climate policies.
› Gilmore (ALP) on the south coast of NSW was heavily affected by the Black Summer fires. The region saw a 12% swing to Liberal candidate Andrew Constance, a vocal former member of the NSW Parliament with a strong climate platform.
› Indi (Independent) Helen Haines, independent for Indi in northern Victoria, strengthened her lead over the Liberals with an 8% swing. Ms Haines has strong climate policies and the north-eastern part of her electorate was burnt during Black Summer.
› Eden Monaro (ALP)  the sitting ALP MP (from a by-election) gained a 4% swing, with a 5% swing away from the Liberal candidate. This seat was heavily affected by Black Summer, and the sitting candidate has been a vocal supporter of climate action.
› Mayo (Centre Alliance) Kangaroo Island in Mayo was heavily affected by Black Summer. The Liberals experienced an 11% swing against their candidate with the majority of disaffected voters switching to the Greens and ALP. Incumbent Central Alliance representative Rebekha Sharkie, who has strong climate policies, retains the seat.
› Page (Nationals) (Northern Rivers of NSW) that was heavily affected by the recent flooding disaster there was a 12% swing to a pro-climate independent.
The Nationals appear to have not lost any MPs this election, but they did suffer swings against them in most of their electorates. Climate change is an issue in their electorates, and their continued opposition to climate action may see them suffer from a similar community organising campaign as the Teal Independents in the future.
In Queensland the Liberal National Party suffered swings to the ALP, Greens or Independents in all seats except Maranoa and Herbert. Darren Chester, the Nationals MP for Gippsland in Victoria had a 4.5 per cent swing to him. He is seen as a moderate within the Nationals and has acknowledged the importance of climate action.
Similarly, Andrew Constance, the Liberal Candidate for Gilmore on the South Coast of NSW has garnered a 2.5 percent swing to the Liberal Party and may win that seat from Labor. Constance berated the Prime Minister over lack of action during the Black Summer bushfires and champions greater climate action within the Liberal Party.
The Climate Council noted that voters impacted by extreme weather events largely turned away from the Liberals and Nationals (with exceptions such as Chester and Gilmore). They provided two tables correlating riverine flooding climate risk in 2030 with the 2022 flood disasters and the 2019/2020 bushfire disaster:
takvera at 10:32 AM
Share